To see, or not to see? Shakespeare on the Island 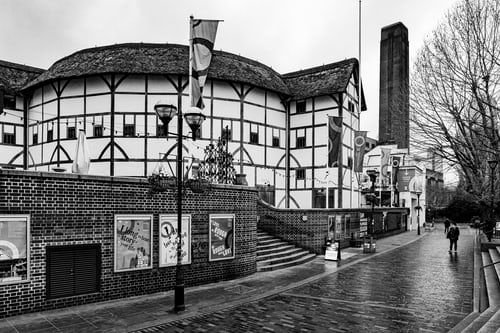 A black and white photo of The Globe Theatre in England. This is the original theatre where Shakespeare put up his plays.

When hearing the name Shakespeare, most students probably think of reading it in English class. Perhaps they did not have an understanding of anything they read or thought it was boring. Well, Shakespeare wasn’t meant for the classrooms, it was meant to be performed! Here on Long Island, we are fortunate enough to be surrounded by theatres and companies who put on Shakespeare performances, either seasonal or year round!

Here are some current or upcoming plays to be checked out, and a brief synopsis of each.

Summary of theatre: According to their website, “The Carriage House Players is a not-for-profit company dedicated to producing challenging, classical, and contemporary works of theatre.” CHP is based at the Vanderbilt Museum in Centerport, LI. Each year, they contribute to the summer Shakespeare shows seen all around the country. Typically, two shows are put up for a month each. Since coming out of COVID, they have put up 4 shows this summer!

Summary of show: Richard III is Shakespeare’s most well known historical play, apart from Julius Caesar. Richard III is the story of the last king of the House of York, and his rise to power. He is a murderous tyrant, fueled by hatred for his family for ostracizing him due to physical deformities he had. Throughout the play, everyone knows he has killed them, despite feeling as though he could not do such heinous crimes. On his rise, he kills nearly his entire family, including two young princes, aged 12 and 7. He betrays everyone who trusted him and helped him into power, and is taken down in the end in a lengthy battle against  Richmond.

Summary of theatre: According to their website, “The Carriage House Players is a not-for-profit company dedicated to producing challenging, classical, and contemporary works of theatre.” CHP is based at the Vanderbilt Museum in Centerport, LI. Each year, they contribute to the summer Shakespeare shows seen all around the country. Typically, two shows are put up for a month each. Since coming out of COVID, they have put up 4 shows this summer!

Summary of show: Twelfth Night, also known as What You Will, is one of Shakespeare’s comedies. Orsino, the Duke of Illyria, is lovesick for Olivia, who is mourning the death of her brother and refuses his marriage proposals. IN the meantime, two siblings are washed ashore after a shipwreck, Viola and Sebastian. Viola, seeking work, attempts to go to Olivia for work, but when denied, dresses as a man and goes to work for Orsino, under the name Cesario. She falls in love with Orsino, but is then tasked with assisting Orsino in courting Olivia, who ends up falling for Viola, disguised as Cesario. On the other hand, the show is well known for the melancholy, comedic relief character who is madly in love with Olivia, Malvolio. He spends the show being tormented by Sir Andrew, Sir Toby, and Maria.

Summary of theatre:  Studio Theatre of Long Island has been around for over 50 years, and is only getting bigger and better. As they expand to East Islip, they continue to offer classes for all ages, and run a theatre youth program. They are mainly based out of Lindenhurst, but with that site under construction, they have moved to Bayway Performing Arts Center in East Islip.

Summary of show:  Prospero uses magic to conjure a storm and torment the survivors of a shipwreck, including the King of Naples and Prospero’s treacherous brother, Antonio. Prospero’s slave, Caliban, plots to rid himself of his master, but is thwarted by Prospero’s spirit-servant Ariel. The King’s young son Ferdinand, thought to be dead, falls in love with Prospero’s daughter Miranda. Their celebrations are cut short when Prospero confronts his brother and reveals his identity as the usurped Duke of Milan. The families are reunited and all conflict is resolved. Prospero grants Ariel his freedom and prepares to leave the island.

Even if Shakespeare or theatre is not your thing, there is so many benefits to seeing a show, and each one is completely different. With that being said, not one of them is classical themed. For instance, The Tempest is pirate themed! With so many productions going up soon, Shakespeare is coming back to life in the form of theatre!