Rumors say it may not even be by da Vinci 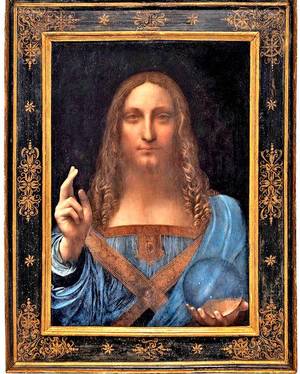 Leonardo da Vinci, the Italian Renaissance artist has painted many amazing pieces of art known by many, including “The Last Supper”, painted in 1498, and the most famous, “Mona Lisa”, which was painted in 1503, but have you ever heard of “Salvator Mundi?” It translates to “Savior of the World” in English. The painting depicts Jesus who is holding a small orb in his hand, which is thought to symbolize the world. This painting was discovered in 2005 by New York art collector, Robert Simon. Research began in 2007 to learn more about this magnificent piece of art.

This painting was recently sold for $450.3 million dollars on November 17th at Christie’s in New York City which makes it the most expensive painting ever sold at the auction. The auction lasted nineteen minutes and expected to go up to $100 million dollars. “Salvator Mundi” was called “The Last da Vinci” at Christie’s Auction. It had beat the current holder which was the Picasso painting known as “Les Femmes D’alger” for only a price of $179.4 million.  An art critic Jerry Saltz said “No museum on Earth can afford an iffy picture like this at these prices” to the Huffington Post in an email.

The painting is being questioned by many as though it was not actually by da Vinci. Some of these people include art history professor, Stephen Campbell. He said “This is not a celebratory moment.” He added that “there is very little Leonardo visible in the painting that was seen yesterday.” He said that only around twenty percent of the painting was done in his workshop. It also could have just been his assistants, who were able to mimic his painting style perfectly.

Eventually, another painting from da Vinci, “The Madonna of Yarnwinder” will be up for auction. Will that painting go even higher than this recent auction has? Will this painting also be questioned as not being painted by da Vinci?