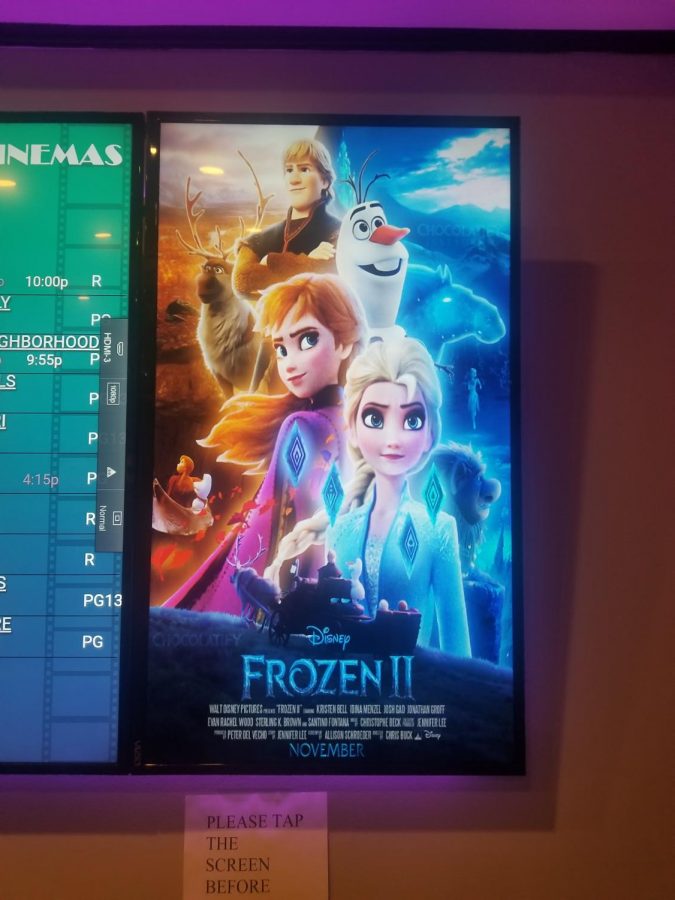 The movie poster at the theater.

It wasn’t surprising to find that it was hard to get a seat in the theaters for Frozen II, considering the success that the first movie had after its release in 2013. Its songs were played incessantly, its plot referenced all the time, and the storyline was loved by children and adults alike.  Of course, after a success like that, it was obvious that Disney was going to milk that metaphorical cash cow again.

This in itself was a success, as the movie broke box office records on opening weekend. It was the highest-grossing debut for Walt Disney Animation Studios, pulling in $130 million domestically alone. It was also the biggest global opening for any animated movie, earning $358 million worldwide.

Perhaps one of the main reasons people were wary about this movie was that they were afraid that this was, indeed, just a shameless money grab. After all, the hit-or-miss live action movies that have barraged the box office seem to allude to the fact that this is Disney’s focus these days. However, the movie did deliver a solid plot line with catchy songs and emotional subplots as the two sisters and their friends take a journey ‘into the unknown’.

Overview
The movie takes place after the events of the first Frozen movie, with everything going seemingly well for our protagonists.  However, Elsa hears a voice singing, calling her, and she’s finding it more difficult to ignore. Once she finally returns her interest in the voice and tries to reach out to it, four spirits, Earth, Water, Fire and Air, living in the nearby magical forest hidden by an ‘impenetrable’ fog.  Of course, an ‘impenetrable’ barrier is anything but that in a story, and this is no different. The spirits of the forest began to cause chaos in water, dousing their torches, leaving their fountains dry, and shaking the earth under the kingdom.

It is then revealed by the trolls that a wrong was committed in the past between Arendelle and the magical forest, and, in order to fix everything, they have to make things right.

The movie explores the themes of love and loss, as well as the importance of doing the right thing, despite how hard it could be to do so- important themes to be explored, especially for children.

Songs
After the success of Frozen’s soundtrack- Let It Go alone certified Platinum eight times- it was important for Disney to follow up with their second movie. Each character got their own share of music- even Kristoff got his own 80’s style ballad .

Elsa’s song ‘Into the Unknown’ explores a theme quite fitting for her character- as the first song, ‘Some Things Never Change’, points out, everything is going well for her, but yet, that unfamiliar side of herself that she repressed for so long is still calling out to her, and she can’t ignore it anymore. Her other song, “Show Yourself”, was a realization of her character as she finally realizes just how strong she is. It’s a pinnacle in her character arc, building upon the confidence she gained during the (in)famous ‘Let It Go’.

Anna’s solo song in the film didn’t fit her usual bright and happy tone. We see her instead at her lowest point, pushing herself to make things right, despite the fact that she had lost everything that she loved. It was interesting to see her determination shine through, and the power that she has, despite not having magic, like her sister.
Villain
While some may argue that the villain of the story was Anna and Elsa’s grandfather, who started the conflict between Arendelle and the Northuldra people, his mistake was viewed more of a wrong that had to be righted, since this happened in the past, before the protagonists were even born. In fact, throughout most of the movie, this mistake wasn’t even known. It was rather interesting to watch a Disney movie without a villain- a theme Disney seems to be exploring, with movies like Moana, which also focused more on writing a wrong (though Te Fiti could be viewed as a villain)

It’s an interesting deviation from Disney’s obsession with the ‘twist villain’- a villain who isn’t seen as such until the end, in a surprising twist, like Hans in the first Frozen. The bit is getting predictable at this point, and I, for one, kept waiting for the leader of the Northuldra people, or Lieutenant Mattias to step into that role. However, that twist villain really never came, creating an interesting energy in which no one was working to defeat a bad guy, and no one was looking to stop the sisters from doing what they were attempting to do.
Plot Holes
The plot, while intriguing and entertaining, had a few flaws that left some unsatisfied.

For one, where, exactly, did Elsa’s powers come from?

Though it wasn’t the clearest, the ice powers that Elsa had from birth came from the fact that Anotahallan, the river referenced in their mother’s lullaby was actually a frozen glacier. Ahtohallan was the fifth spirit, the ‘bridge’ between magic and humanity. Taking away from the movie, it seems like the mother, Queen Iduna, was the spirit, and she, in turn, transferred that to her daughter. However, the whole situation was a bit confusing to watch, and it took some piecing together after viewing the movie to come to this conclusion.

After Elsa froze from delving too deep into the truths of the past, what thawed her?

The first movie taught us that ‘love will thaw a frozen heart’, in a scene showing a powerful love between the sisters. In this movie, however, it wasn’t made as clear. While it could have been Anna shedding a tear over Elsa’s ‘death’, it wouldn’t have made sense for Elsa to unfreeze further into the story. It was most likely Anna’s righting of the wrongs of the past, which seemed to be the theme for this movie, that did the trick, but after the first movie provided a different solution to the problem, it was a bit confusing.
Conclusion
Despite its flaws, the movie has gotten an impressive 93% Audience Score on RottenTomatoes.com and a 7/10 audience rating on Metacritic. It was a satisfying follow-up with these beloved characters that was enjoyable for all ages and provided a satisfying conclusion to their story, if Disney chooses to accept it as such.