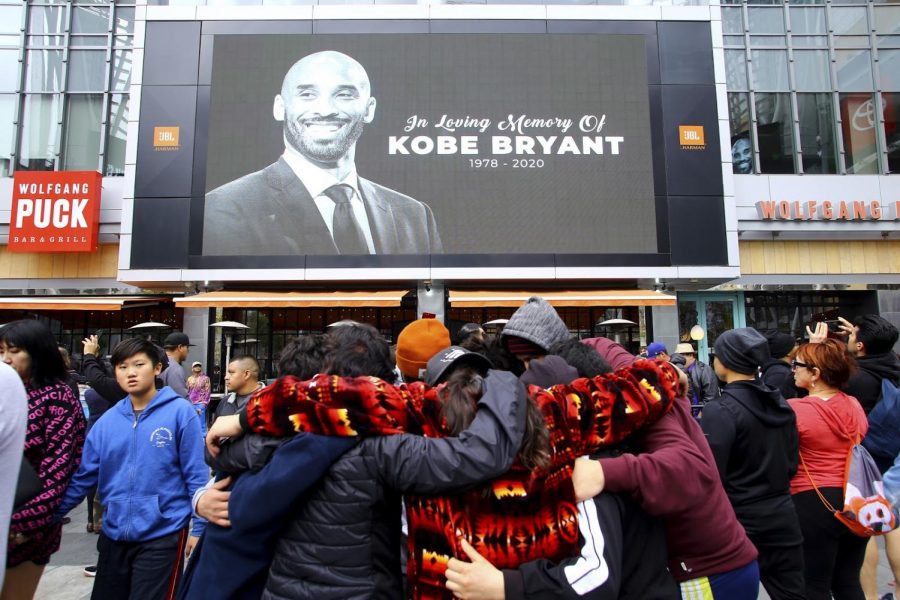 On January 26th, 2019, Kobe Bryant, his daughter Gianna, and seven others were killed in a helicopter crash. The other people in the helicopter were John Atobelli (a baseball coach at Orange Coast College), his wife Keri, his daughter Alyssa, Christina Mauser, Sarah Chester, Payton Chestor, and the pilot, Ara Zobayan. All of those on board were parents, coaches and players on Kobe’s basketball team, and they were on their way to the Mamba Sports Academy to attend a youth basketball event. This trip was nothing out of the ordinary, as Kobe often used private helicopters to travel. Although they have not determined what caused the crash, the Sikorsky S-76B helicopter they were traveling on was found to not have a recommended safety device on board. It remains unclear at this time whether this would have helped prevent the fatal crash, as the police are still conducting the investigation.

Whether you were a fan, a friend, or did not know of Kobe until his passing, everyone around the world was hurt by this tragedy. The 41 year old had four beautiful daughters (Gianna, Bianka, Capri, Natalia) and a loving wife, Vannessa Bryant. After TMZ first broke the news, the whole world came together to pay their respects to Kobe and the others that were on board. During the NFL’s Pro Bowl, Russel Wilson led the team in prayer, while the stadium had a moment of silence before chanting Kobe’s name. After hearing about the news, Neymar held up 24 to dedicate his goal to the Black Mamba. In Los Angeles, crowds gathered outside of the Staples Center to pay their respects. Most notably, in the NBA, after the opening tip off, teams agreed to take a 24 second violation in order to honor the man that once wore the number 24. To cap off all of these tributes, Los Angeles will host a public memorial at Staples Center on February 24th for all fans to attend.

Kobe’s impact on basketball and the sports world is immeasurable. From his five NBA championships to his infamous “Mamba mentality,” Kobe’s legacy will never be forgotten. During his 20 seasons in the NBA, he finished his career as the 4th all time leading scorer in NBA history, an 11 time All-NBA First Team Player, and a two time Olympic gold medalist. With these numbers, he cemented himself as one of the greatest to ever play the game. Outside of his numerous accolades, the biggest thing that people knew and appreciated about him was his relentless work ethic. He was the type of guy that was the first one at practice and the last one to leave after it ended. With this mentality. he created the “Black Mamba” alter-ego, which was his way of getting through the lowest points of his life and career. His legendary drive to be great made him a prime example of the fact that hard work pays off.

Kobe’s legacy did not stop on the basketball court. After retiring from basketball in 2016, Kobe went on to pursue other passions. Whether it was the creation of his Oscar winning short film “Dear Basketball”, or the building of his multimedia production company Granity Studios, Kobe continued to work hard at everything he did.

When reflecting on his career, Kobe stated that out of everything he accomplished, the raising of his 4 daughters was his biggest accomplishment. Out of all of his daughters, the second-eldest, Gianna, was seen as the one to carry on Kobe’s legacy. She shared the same fierce competitive spirit that made her father such a great player, and was on track to be an outstanding basketball player and person, like her father. Overall, Kobe was an incredible father and husband, as they were always the most important thing to him.

It is safe to say that the world was shocked by the passing of Kobe Bryant. Seen as a role model to many, he was an individual of the utmost character and was loved by everyone that knew him. He exemplified to the world the dedication and determination that it takes to be great. He inspired athletes across all sports and paved the way for them to become bigger than the sport they play, as by pursuing his other passions after his retirement, he showed that retirement from a sport can signify new beginnings. With all of this being said, this tragedy goes to show how precious life is. At any given moment, our lives could end, and it is important that you live every second of it being the best person you can be. So, when mourning Kobe’s death, think about your loved ones, and don’t hesitate to express your love for them.

If you would like to honor the Team Mamba family, the Mamba Sports Foundation has set up the MambaOnThree Fund which will support the other families that were affected by this devastating tragedy. To donate, please go to MambaOnThree.org. To further Kobe and Gianna’s legacy in youth sports, please visit MambaSportsFoundation.org. Regardless of if you can donate or not, please keep Kobe’s wife and three daughters in your thoughts and prayers as they mourn the loss of their beloved father.