Derrick Henry and the Titans Keep on Rolling! 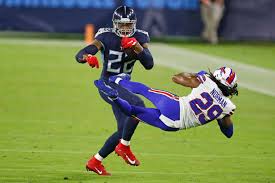 This Week Derrick Henry and the Titans beat the Colts to the score of 45- 26 where King Henry rushed for 178 yards on 27 carries and had three touchdowns also catching two receptions for seven yards. Don’t forget about the boys Ryan Tannehill and AJ Brown! Tannehill passed for 221 yards and had one passing touchdown and one rushing touchdown on the day and Brown had three catches for 97 yards and a touchdown. Brown also had a phenomenal play on special teams as the Colts were kicking an onside kick. Brown took it back to the house to just keep adding onto the lead they took over the Colts. Derrick Henry is the face of the Tennessee Titans and without him and the Titans run first offense there is no way they would be as good as they are without him.

The world first met Derrick Henry in 2015 on the National stage during his junior year at the University of Alabama where he rushed for 2219 yards and 28 touchdowns helping Alabama beat Clemson in the National Championship game 45-40. To put the cherry on top, Henry won the Heisman trophy and it wasn’t even a debate that he was going to win it. Derrick Henry was a man among boys in College football, and soon he would be dominating grown men years down the road.

When he was preparing for the NFL draft, Derrick showed is agility in having a 4.5 second 40 yard dash and other astonishing combine stats. Teams were wary about how long he was going to last in the league to the giant workload he has been put under at the running back position since high school . Another concern was his catching ability and how he wasn’t a one cut down hill runner. However, it took him time to build up his speed and teams didn’t like that. Some analysts had Henry going in the late second round early third round range. In the 45th pick in the draft the Tennessee Titans made him apart of their family.

Derrick was not the starter at first as he was second on the depth chart to DeMarco Murray. Murray, a good constant running back in the NFL, had a pro bowl season as the starter in Tennessee with Henry in the backfield.  The season after Henry was still the backup and people were questioning if he was going to live up to the hype of becoming as dominant of a player he was in college. To help Henry,  he called former Titans running back, Eddie George, to give him some advice. He gave Henry some tough love, saying that he needs to just be better and finish runs and just run though your competition and overall be more aggressive.  George lit a fire in Henry’s stomach in 2018 and the rest is all history.

In week 6 against the Jacksonville Jaguars, Derrick had an iconic moment when he went 99 yards to the house for a touchdown against  a top tier defense that went to the AFC championship the following year and just straight up dominated. He made them look like they were flat up scrubs that could not play the game of football and showed them up as Henry carried the ball 17 times for 238 yards and four touchdowns. To finish off the year, Henry had his first thousand yard season under his belt and it would certainly not be his last.

The Titans would continue the trend of making Henry the work horse as he carried the Titans with Ryan Tannehill to lead the Titans to the AFC Championship game against the Chiefs. They would end up losing in the AFC Championship to the Chiefs, but in the process of King Henry dominating in the regular season he captured his first rushing title and he will most likely capture his second one this year. Henry doesn’t look like his dominance is stopping any soon for the Titans as he just got extended for his great play with a four year $50 million contract. It is certainly well deserved as Henry has been the most dominant running back in the league.  He makes grown men look like children on the field. We will see if the old school style of football can still win a championship in today’s league with King Henry at the helm.